Prime Minister Imran khan have started the PM Apna Ghar Housing Scheme 2018 in which government will build 50 lac houses for poor families, govt employees and needy persons. On 10th October 2018 PM Imran khan announced the details about Insaf Housing Scheme 2018 and its criteria for different people and he also said that he will personaly monitor this project of Apna Ghar Housing scheme 2018. Housing Scheme minister suggested imran khan that they have completed the plan and they should start the project quickly to complete the target. This project will be started in Islamabad, Rawalpindi, Faisalabad and other cities in Punjab but later on it can be expand to Sindh and KPK.

Army also said that they will help government to complete this project as this is for poor families and needy people so army will fully support this project. It looks very easy to build 5 Millions houses for poor people but it is not as easy as it looks a like. It takes efforts and hardwork to complete. Last Government also started the same project but failed to launch on time now they are facing a case against Ashiana Housing Sceme. PM Apna Ghar Housing Scheme 2018 Eligibility Criteria meeting people will get the registration form and they can get house on low cost. Here in this article you can get complete details of Naya Pakistan Housing Authority Eligibility Criteria and people who can get benefits from this are as follows:

To get house in PM Imran Khan Low Cost House Scheme you must prove that you belongs to a labour, lower class or middle class family moreover applicant must need to prove that they are living in a rent house and they do not own a plot or house. All the government employees who have allotted with any house or plot before can apply Apna Ghar Housing scheme 2018.

In this regard punjab govt is going to build houses on Faisalabad Road Makuana and Govt have got 650 Canal land for this purpose. government of punjab planed to build houses in two years.

According to the govt Plan plot size will be as follows:

People can book flat for living purpose but it will be offer on 10% down payment and remaining amount can be paid in installments. 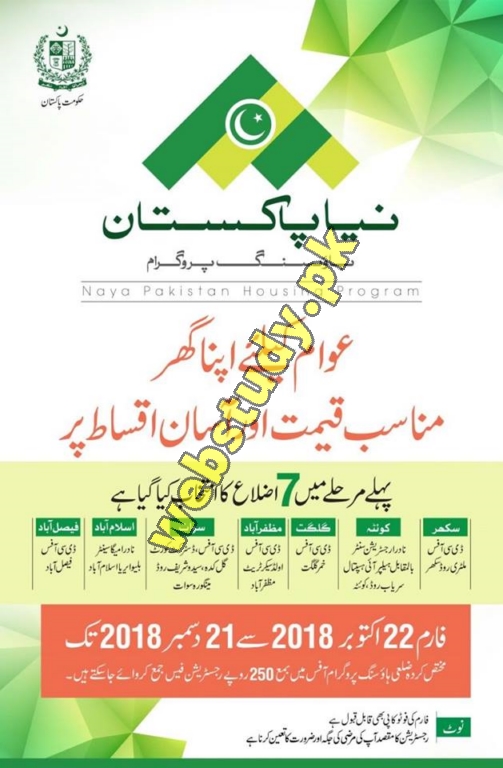 Total installment and 10% down payment plan is not yet discussed but flats and houses will be in the range of 8 lac to 12 lac PKR that is very affordable by any person because you have to pay only 10% amount at the time of build and you can pay remaining amount in installments. It is hoped that full plan will be discussed in a press conference on 15th October.

Very first it will be launched in 7 districts and NADRA will issue the application forms of Apna Ghar Housing Scheme. Naya Pakistan Housing Authority will start building the houses in next three months and survey of complete plan will be completed in two months. Yet government have to choose the land where apna ghar house scheme houses will be build.

How Much Is Fidya For Ramzan 2020 In Pakistan